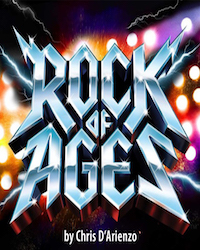 It's the end of the big, bad 1980's in Hollywood and the party has been raging hard. Aqua Net, Lycra, lace and liquor flow freely at one of the Sunset Strips last legendary venues. But the rock and roll fairy-tale is about to end when German developers sweep into town with plans to turn the fabled strip into just another capitalist strip mall. Can it all be saved before it's too late? Only the music of hit bands Styx, Journey, Bon Jovi, Whitesnake and more hold the answer. Rock of Ages was nominated for five Tony Awards, including Best Musical.