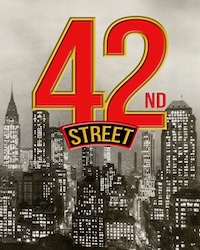 Winner of Best Choreography and Best Musical at the 1981 Tony awards, 42nd Street follows the tap-dancing company of a Broadway show as they work to produce a hit in the midst of the Great Depression.

When highly successful Broadway producer Julian Marsh decides to put on a show while America faces the Great Depression, hopeful Peggy Sawyer sees her chance to finally make her Broadway dreams come true. But when disaster hits Peggy and the entire company, she quickly realizes that turning her dream into reality takes a bit more than she had planned on originally. Through rigorous rehearsals filled with huge dance numbers and fantastic songs, Julian, Peggy, and the rest of the company try to save their show and their jobs.